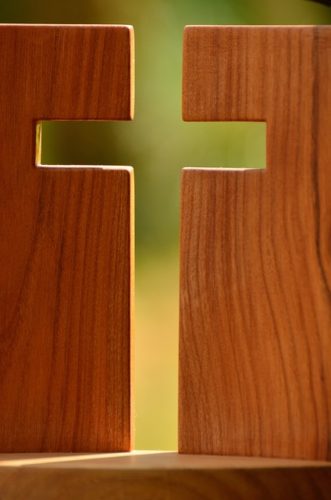 Have you ever been in a situation where everything you do just doesn’t work?

When you encounter a problem, you may pray for a solution, asking God for help and wisdom. And you’d try to do things which you think/believe you ought to do in order to resolve the issue or problem. Yet, whatever the things you may try, the situation just gets worse and worse, or say things do not go the way you expect. So you ask God in desperation,

What shall I do, God?
What did I do wrong?
Please help me God!

The disciples of Jesus in Acts had been through such a situation. Even though the disciples were all faithful to their mission to share the good news of Jesus Christ, their life situation just got worse and worse; first they got arrested, and questioned by the authority (Acts 3:1—4:22), and then they got arrested again, and flogged (5:12-42).

The persecution hit its climax when Stephen was stoned to death in chapter 7. He became the very first martyr in the Christian history. And from today’s text we see that because of a great persecution, many of the believers were forced to leave Jerusalem and scattered throughout Judea and Samaria (8:1).

But what is going on here?

It seems like the more the disciples preached the gospel, the more severe the persecution became. And in the end, they’ve lost their home, Jerusalem, the holy city.

Where is God here?
Why didn’t God protect them from the persecution?
Was God not powerful enough to stop it?
Is God really sovereign?
Where is God in all this?

God can use anything for His plan

what would you do if you were one of the disciples there?

The disciples "preached the word wherever they went” (v. 4). And Philip preached in a city in Samaria (v. 5). But as you may know, in this time, Jews and Samaritans were not good friends to one another (see John 4:9). For Jews, Samaritans were not pure both in ethnicity and religion, and Jews treated them like Gentiles.

So in Jesus’ time, the Jews would never thought of going to Samaria and being a witness to Jesus there. But

God used the persecution in Jerusalem to scatter the disciples so as to spread the good news around the world.

As a matter of fact, this is to fulfill what Jesus said in Acts 1:8,

But you will receive power when the Holy Spirit comes on you; and you will be my witnesses in Jerusalem, and in all Judea and Samaria, and to the ends of the earth.

Jewish leaders were persecuting Christians out of their own motive. They did not know that they were a part of God’s master plan of salvation. Yet, God can use such an evil act in order to accomplish His good plan.

God can use anything, both good and bad, for His plan. God works for the good.

In our eyes, sometimes things may not go the way we expect. The situation may get worse and worse no matter how much you may pray or no matter what you may try. Nothing works. You may feel like you’re losing.

Yet, it doesn’t mean that God is not working or God is losing. God is always in control, and He is sovereign. He can use anything, or everything, both good and bad, to work for the good of those who love Him, who have been called according to His purpose (Romans 8:28).

So no matter how bad the situation may look right now,

keep on trusting God and being a witness to His kingdom by sharing His love with those around you.

God can use anything for His people

Philip "went down to a city in Samaria and proclaimed the Messiah there” (Acts 8:5). He also performed many signs by casting out demons and healing many (vv. 6-7). And eventually they came to believe Philip, and were baptized, both men and women (v. 12).

When I read this passage, it appears to me that they were so quick to believe in the Messiah. I wondered whether there is any reason for their quick conversion. And I think there may be at least two reasons for them to come to know Christ so quickly.

Another reason for their quick conversion may have to do with the man named Simon who had practiced sorcery there. The Samaritans in the city were all amazed at his magic and they had followed him (v. 10). But when Philip came to preach the gospel, they turned their back on Simon, and believed Philip. Why?

Well, I think a part of the reason is written in Deuteronomy 18:14, which is one verse before the prophecy about “a prophet like Moses.” It reads

The nations you will dispossess listen to those who practice sorcery or divination. But as for you, the Lord your God has not permitted you to do so.

Here Moses is saying that you, Israelites, must not listen to sorcerers or magicians, but rather you must listen to a prophet like Moses, the Messiah.

It seems likely and reasonable to me that when the Samaritans heard that Jesus is the Messiah, the prophet like Moses, they must have remembered Deuteronomy 18:14, and come to realize that they had been doing what God forbids them to do, and thus compelled to repent and believe in Jesus, the Messiah.

In our lives, we also do something God forbids, something displeasing to God.

This is especially true before we come to know Christ. Before believing in Jesus, we’d all gone astray from God, and lived self-centered lives in one way or another. We’d done so many things displeasing to God. Yet, He had not given up on us. Rather

God used such displeasing things to have brought us closer to Him.

In all things, both good and bad, God works to bring His people closer to Him. God works for the good of His people.

God can use anything for His purpose

About how God works in our lives, we can learn one more thing from today’s text.

Even though the Samaritans were baptized in the name of Jesus, the Holy Spirit had not yet come on any of them (v. 16). But when Peter and John came from Jerusalem, and prayed and laid hands on them, they received the Holy Spirit (v. 17).

If you just read this passage for the first time, you may come up with many questions like

Why hadn’t the Holy Spirit come on any of them when they got baptized?
Was there anything wrong in the ministry of Philip?
Are the apostles only ones who can pray for the Holy Spirit to come on people?

To answer these questions, we must remind ourselves that what is written in Acts is very unique in that particular time of the Christian history, and that Acts mainly describes how the early Church started with the help of the Holy Spirit.

we should be very careful when trying to apply what is written in Acts to our lives because it is more descriptive than prescriptive in nature.

Rather, Peter and John were sent from Jerusalem because the apostles heard that “Samaria had accepted the word of God” (v. 14). So they visited there to witnesses what God had been doing in Samaria.

if you were Peter or John, what would you do?

You don’t really understand what is going on. Things do not seem to be going the way you expect. What would you do in such a situation?

As we know, Peter and John did what they could do without knowing exactly what God would do and why. Namely

they simply trusted that God would work for His good purpose, and prayed for His Spirit.

I think this is how we are to live as followers of Christ. Sometimes we don’t know exactly what is going on in our lives. Things go in the way we do not expect. We cannot fully understand God’s purpose. Yet

we can still trust God who can use anything, both good and bad, for His good purpose.

And we know that in all things God works for the good of those who love him, who have been called according to his purpose (Romans 8:28)

No matter how bad the situation may look right now, God is sovereign and He is in control.

God can use anything for His plan to be accomplished.

God can use anything for His people to be saved.

God can use anything for His purpose to be sustained.

You may have tried everything you could think of in order to make things work. But nothing worked, and the situation is just getting worse and worse.

If you’ve been going through such a difficult situation, know that no matter how bad the situation may look,

God is still working for your good.

And trust God who is sovereign and who works for the good of those who love Him.

But it’s easier to say than do. And I understand that you would not feel that way when you’ve been going through a difficult time.

Yet even so, I’d like you to pray to God that you may be able to see things not from your own perspectives, but from God’s.

Because, in many cases,

And maybe, the situation is not really getting worse; but actually it’s getting better in God’s eyes.

When you live as a Christian in Japan, you may feel discouraged by others or feel isolated from a group/society. Yet, remember you are not alone. Jesus Himself has been through all. He knows your pain, sorrow, and shame. And He suffers with you because He is always with you.