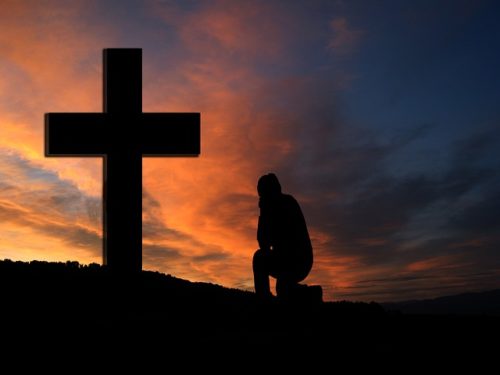 Have you ever suffered for the sake of your faith in Christ?

If you come from a Muslim country or from China, you may have suffered a lot just because you’re Christian. Here in Japan, however, we may not suffer as much as in those countries.

Yet still, because Christians are minority in Japan, you may have experienced some kind of inconvenience or had some conflicts with other people because of the way you live as a Christian.

Also, because what we value the most as a Christian is different from what non-Christians value the most, we may go through some conflicts with our close friends or even our spouse if they are not Christians.

So in one way or another, I think

we’d all suffer here in Japan because of the way we live as a Christian, just like the disciples of Jesus in Acts.

And today, the questin I’d like us to think about is the following:

What should we do when we face some kind of inconvenience or some conflicts with others as a Christian?

Today’s story begins after Peter and John were released from questioning by the religious leaders. They wanted to punish Peter and John. But they could not because the people were praising God for what they have done (healing a lame beggar at the temple). So instead of punishing, they threatened them not to speak or teach in the name of Jesus, and let them go (4:18-21).

As you see later in Acts, this is just a beginning of persecution that the early Church faced. They suffered because they lived as a Christian; namely

they suffered because they did not listen to the religious authority, but rather they listened to God (v. 21).

What helped the early Church to continue to listen to God even at the cost of suffering?

What enabled them to endure the persecution? What makes it possible for them to preach Christ with boldness? Three things to observe.

After Peter and John came back from the questioning, they began to pray to God by saying “Sovereign Lord, you made the heavens and the earth and the sea, and everything in them” (v. 24).

And because He is sovereign, nothing or nobody can mess up His divine plan of salvation (vv. 25-26; cf. Psalm 2:1-2). God will carry out His plan as His power and will have already decided.

Indeed, the religious leaders plotted with Herod and Pontius Pilate to crucify Jesus. But

God even used their evil intention in order to fulfill His plan of salvation for Jesus to die on our behalf and to be raised from the dead (vv. 27-28).

In all things, good or bad,

God works for the good of those who love Him, who have been called according to His purpose. (Romans 8:28)

The early Church knew this truth, and this enabled them to keep on listening to God, not to anybody else.

the persecution was not against them, but against Christ, God’s anointed one.

Peter and John were arrested and put in jail for questioning. And the religious leaders threatened them not to preach the resurrection of Jesus. The disciples understood that to be a continuation of opposition against Jesus, not themselves.

That is why they quoted Psalm 2:1-2 in Acts 4:25-26, saying that their threats are part of the opposition against the Lord, and against His anointed one.

As a matter of fact, Jesus Himself thinks that their persecution is not actually against the disciples, but against Himself. In Acts 9:3, Jesus says to Saul, who became the apostle Paul later but at this point who had been persecuting the disciples, “Saul, Saul, why do you persecute me?”

Suffering with the empowering Spirit

In the midst of opposition the Church asked God for boldness to speak His word. Then God answered their prayer, and they were filled with the Holy Spirit and spoke the word of God boldly (Acts 4:31).

Here we must not forget that we receive this power from the Spirit by God’s grace very much like the gifts of the Spirit. We don’t earn the power, but we simply receive it as a gift according to His purpose. Also, this power is not for our own benefit, but for the glory of God (see Acts 1:8).

The early Church suffered a lot for Christ because they kept listening to God, not to other people. They were able to do so because they knew

These truths enabled the disciples of Jesus to continue to listen to God, enduring the suffering, and proclaiming the gospel with boldness.

They’d got everything they needed, namely, the Trinitarian God on their side.

They had to suffer for Christ. Yet they suffered with Christ.

This is true not only for the early Church but also for us today because our Trinitarian God is a living God. He is the same yesterday, today, and forever.

Even though we may have to suffer for Christ, we suffer with Christ.

When you live as a Christian in Japan, you may feel discouraged by others or feel isolated from a group/society. Yet, remember

you are not alone.

Jesus Himself has been through all for Himself. He came to the world, which was His own. Nevertheless nobody really understood Him. Even His disciples, who had spent about three years with Him deserted Him when He was arrested. Moreover, Judas Iscariot betrayed Him. Peter disowned Him three times.

And He even suffers with you because He is always with you.

Furthermore, His Spirit, the Holy Spirit is always ready and even eager to help you. So ask for His help.

Also remember that no matter how bad your situation may look right now, God is sovereign and He can and will bring something good out of it in His timing and in His way.

So let’s continue to trust in God, and walk with Jesus, asking the Holy Spirit for His help.

You may suffer for Christ, but you suffer with Christ.

By grace, God has given us the life of His only Son Jesus, which is way much greater than what we could possibly give back to God. So all we can do is to give thanks to God for His love and grace, and try to live the life God wants us to live, remembering that His grace is sufficient for us.